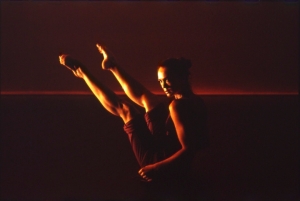 choreographed and peformed by Liz Lea

music composed by DJBC and Liberty

In that dark not quite human space where the inner and out landscapes of the body meet, she meets and merges with the shadows, together they are changeable, cunning and unpredictable.

Created in Australia and the UK, Premiered at the Solo Tanz Festival, Stuttgart, winning two awards.

‘she unleases a power and a fiery energy’  The Canberra Times

‘Lea portrays the landscape of her emotions by shape-changing through animal, spirit and human forms. The concept of the work, as well as its flickering mime and facial expressions, is eastern, but Lea moves with a broad, supple and very western energy’   The Guardian

‘InLand showcased Lea’s feral strength and a leggy animal glamour laced with controlled, nervous twitches. She began slow and low, a cross between jungle feline and sensual mantis, and gradually accelerated into jumping kicks. This unpredictable creature was beautiful to observe, but best to stay out of her path’  The Times